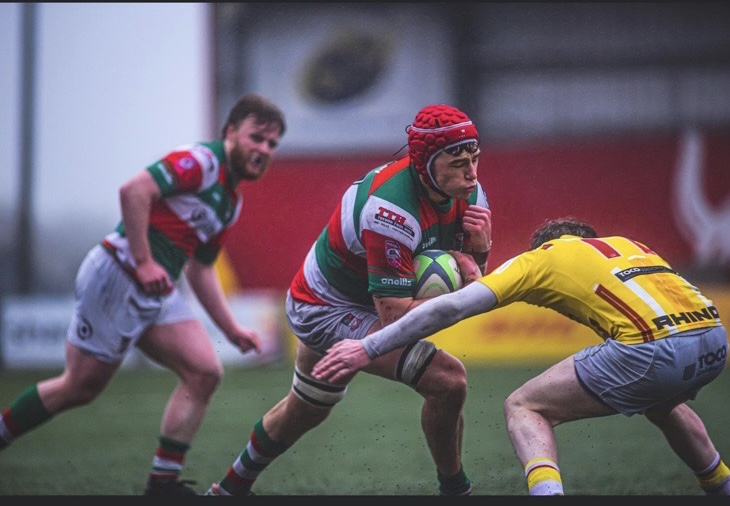 Match report sourced with thanks

It was a very tough hard-fought encounter at Musgrave Park last Saturday, with Bruff emerging victorious after Warren Loulanting crashed over for the game’s only try just after the hour mark. The strong wind and heavy rain played a huge part in the game; and the ‘Well will rue not building up a lead in the first-half when the wind was in their favour.

The ‘Well tackled tenaciously from the off. Big hits were made throughout and often forcing Bruff to lose the ball. Andrew Mintern and Ryan Kelleher made some big turnovers around the field while Reece Mintern and Mike McCarthy were also busy in the defensive line.

Within the opening minutes; the ‘Well almost created a breakaway. The ball was fed out to Evan O’Connell who got past the Bruff defensive line on half-way. He fed the ball out to Kelleher who just had to check his stride and the Bruff recovery defence snuffed out the chance.

The ‘Well scrum proved strong; winning a series of penalties while the line-out was also solid, with Conor O’Brien securing possession and sometimes stealing possession on the Bruff throw-in. The ‘Well did have some opportunities to form attacking mauls in the 22; but just couldn’t maintain full control as the line got near. The ‘Well also opted to kick three penalties at goal; with varying levels of difficulty but unfortunately the efforts all went narrowly wide of the left-hand post.

Bruff finished the half the stronger and almost got over after an impressive maul of their own. It was halted just short and when the ball was passed out Pa Maher almost powered over. The ‘Well were tenacious in defence and eventually forced a turn-over and Ruairi Geary cleared the ball.

Having failed to register a score in the first-half; the ‘Well nudged over the first score of the game in the second-half. Having worked the ball upfield through some Loughrey kicks and the defence forced a penalty. Given the wind; it may have been Loughrey’s most difficult effort but he punched the ball through the posts.

The game turned on a maybe harsh yellow-card just after the hour mark. Bruff’s fierce rucking saw them win possession on the ‘Well 22. With the ball coming out of the ruck and being played, Harry McHenry stretched over to reach the scrum-half. A penalty was awarded to Bruff that Collins kicked over but McHenry also saw yellow.

The crucial try came during this period. From the kick-off; a deep clearance from Bruff went into touch for a 50-22, with the ‘Well having a man less in the backfield to cover. A strong drive brought play close to the line and Loulanting ran against the grain to crash over the line; with Collins superbly converting from the touch-line.

The ‘Well had to play from deep, with Conor O’Brien and Gary Downey making some decent breaks but it proved too much a task to recover and in the end the team had to settle for a losing bonus point.