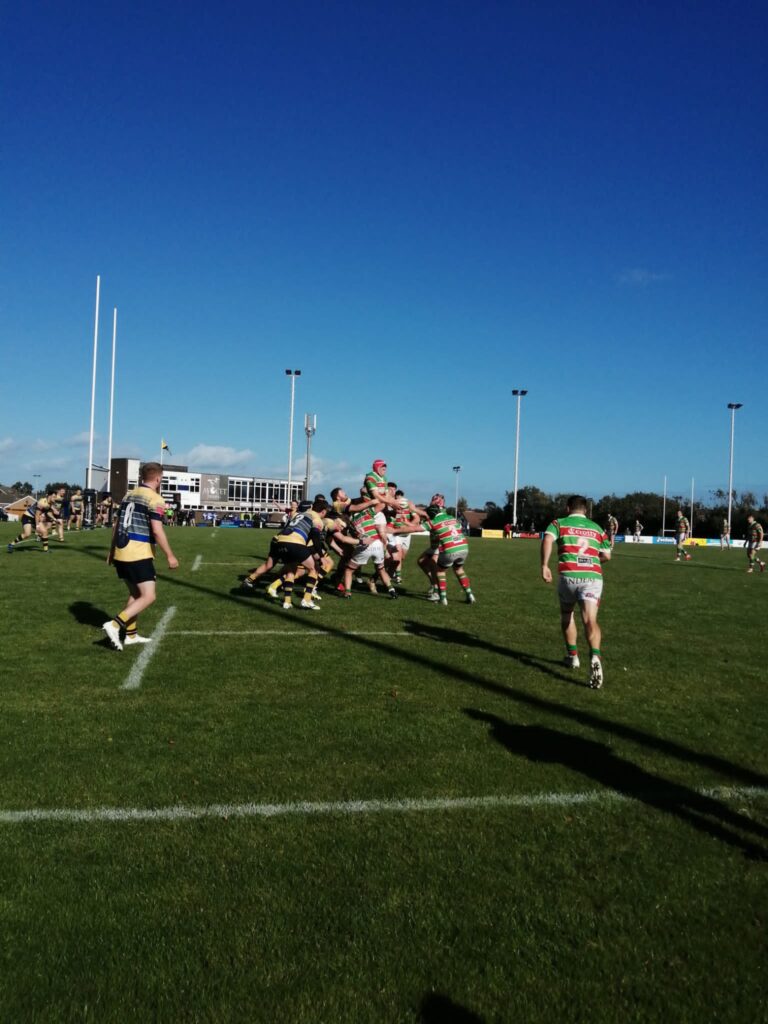 It was a tough opening trip for Sunday’s Well; as they took on last season’s promotion play-off contenders up in the other end of the country. The team equipped themselves very well and came out with a magnificent first-half display; but in the end a strong effort by the hosts combined with some misfortune seeing the ‘Well down to 13 men for a crucial ten minute period; saw momentum sway in Bangor’s favor.

From the off; the ‘Well were getting the faces of Bangor and their high pressure defence was causing immense problems. Conor O’Brien was also causing chaos at line-outs, while Denis Hurley and Joshua  Featherstone made some strong early line breaks. Bangor weren’t threatening any tries but they did manage to nudge themselves into a six-point lead; with the strong boot of Rhys Larmour proving deadly accurate.

The ‘Well retained confidence and a penalty to the corner led to a dominant driving maul see Jack McHenry given a clear path by his fellow forwards to touch-down. Featherstone converted. LArmour restored Bangor’s lead with a penalty on 34 minutes; but the ‘Well pinned Bangor back deep, with a half break from Kieran Maye. While Bangor claimed a defensive line-out, the pressure defence of the ‘Well created a turn-over. Dan Courteny; who was lively throughout in directing attacks ,provided quick ball and after several powerful carries; Andrew Mintern powered over the line. Featherstone made it a 14-9 game with only a minute remaining.

Bangor attacked from the kick-off and finally pressed inside the Twenty-Two. Sensing an opportunity they spread the ball out to the left-wing but Kieran Maye stepped up in open play and snatched a long pass inside his own Twenty-Two. With the Ulster team caught flat-footed he raced away, over 80 metres showing great pace and determination to touch down under the posts; helping the ‘Well stretch their lead to 21-9 at the break, with three tries in the bag.

No one was getting complacent at half-time and it stoked the fire in Bangor. They pressed hard from the resumption and the ‘Well were pinned back. Their defence was ferocious but they couldn’t relieve the pressure. With Mike McCarthy having been injured earlier, when Evan O’Connell who went into prop forward was yellow-carded it meant uncontested scrums and the ‘Well going down to 13 men.

Sensing blood, Bangor made use of the space. They quickly scored off the initial move before another uncontested scrum from deep saw the ball go through the hands and their speedster Conor Scollan raced up field. The ‘Well were able to scramble but quick ball saw Matt Nesbitt exposed the space and the two LArmour conversions saw Bangor sneak ahead 23-21 on the hour mark.

It was nip and tuck for the remainder of the half, with the ‘Well restored to their full complement.Conor O’Brien made a great marauding surge and JOhn Costello carried hard. But it was the hosts who managed to sneak a late try with wingerRob Gamble powering over in the corner. Larmour faced a tough touch-line conversion into the cross-field but managed to strike it over somehow; cruelly denying a gallant ‘Well team even the consolation of a bonus-point.